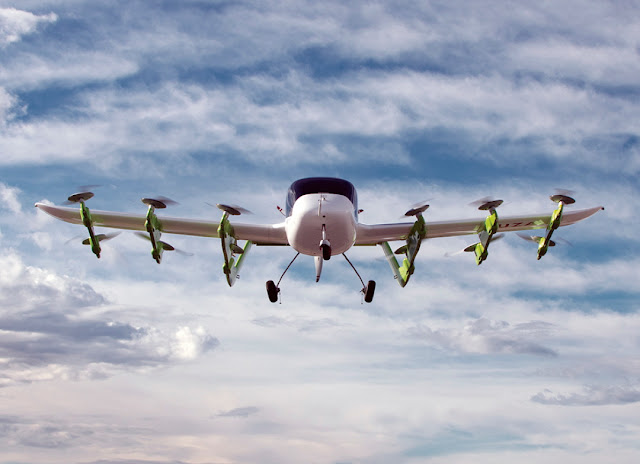 Electric power is slowly taking over the transportation industry. A very short time after getting battery electric cars, we can see some engineers trying their luck at producing aircraft powered by electricity. 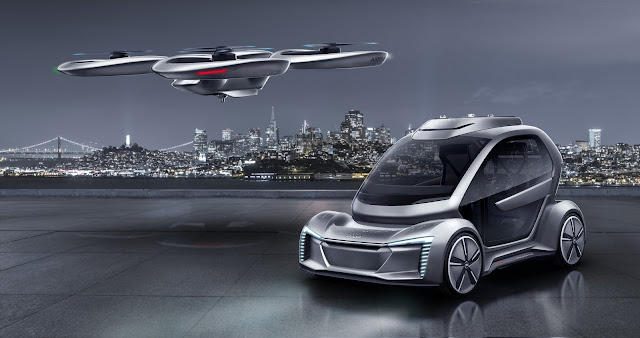 Audi have joined a very ambitions project that is designed to help resolve traffic jams in largest cities of the world. The project Pop.Up Next is developed in partnership with Ital-Design and is represented by a modular vehicle. This vehicle consist of two parts: a small two-seater car and detachable air propulsion module that turns this car into an aircraft with vertical take-off and landing capabilities. 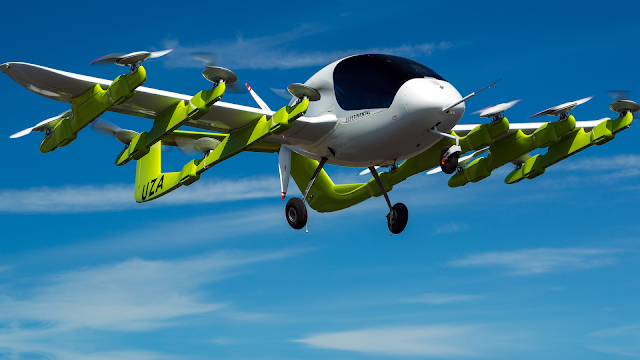 Cora is a new all-electric aircraft that was specially design to make everyday flight more accessible for general public. Developed with an intent to be used as an air taxi, Cora has a vertical take-off and landing capabilities, can operate at altitudes between 500 ft to 3000 ft and bring you to the desired destination up  to 60 miles away. Cora is using 12 independent lift fans to fly at speeds up to 110 miles per hour. 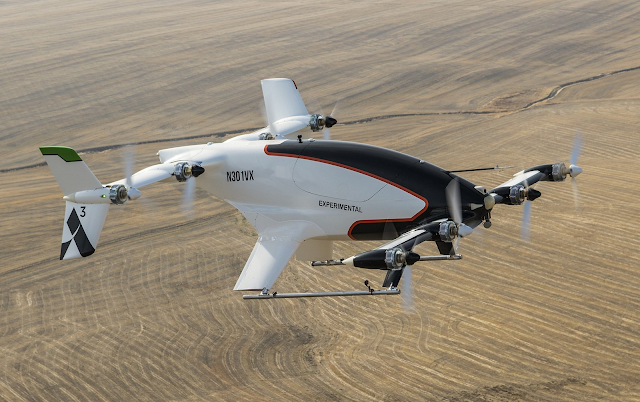 Engineers at Vahana, who are backed by Airbus, were able to carry out a first flight of their full-scale electric aircraft. During the test this compact VTOL was able to take off with the payload of 1642 pounds and showed stable operation for 53 seconds. This proof-of-concept flight got the company one step closer to satisfying the growing need for urban mobility and bringing to the market a single passenger electric aircraft with electric propulsion and an advanced autopilot. 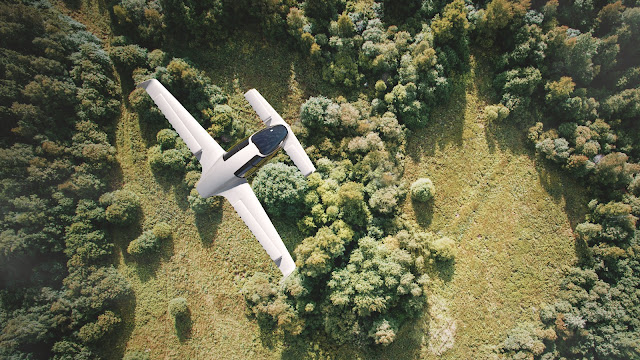 Do you know an aircraft that can fly as fast as a Formula One car, make less noise than a motorbike but be suitable for accessing inner city zones? Although it sounds too good to be true but there is one vehicle that suits this description. It's Lilium Jet. This all electric passenger jet can bring you from London to Paris in just one hour. The range on a charge is 185 miles, so Lilium Jet is fit to be used as an air taxi in large cities. 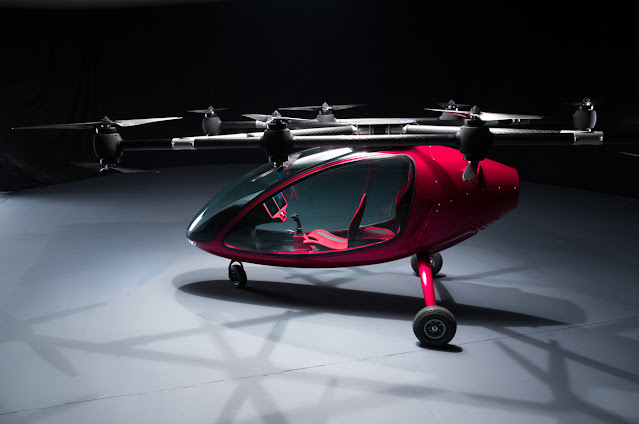 Passenger Drone is an eco-friendly air taxi that is powered 16 electric motors and propellers. Two passengers can comfortably travel in this aircraft that only need to input their final destination through an interactive display. Although the Passenger Drone is guided by a cutting edge autopilot system, passengers can use a joystick to guide the air taxi in case of an emergency. 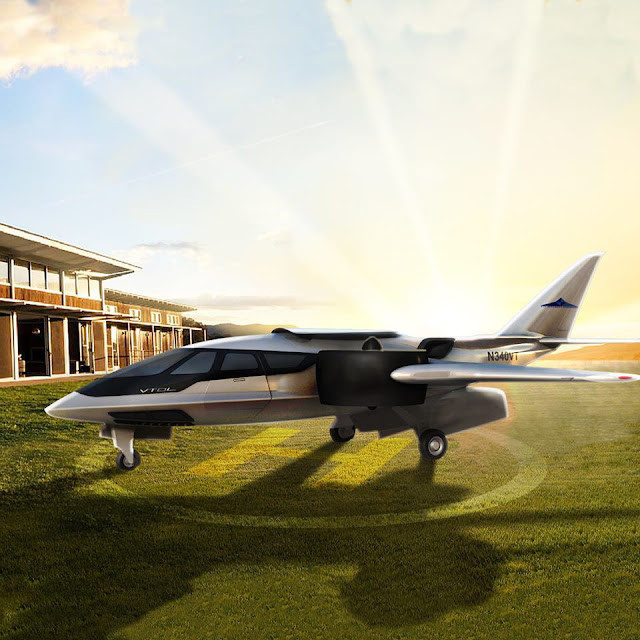 Trifan 600 is brought into air by a set of ducted fans, two of which can rotate when needed. The hybrid electric drive produces less emissions but has similar performance characteristics compared to similar aircraft. After taking off vertically, the aircraft needs only 90 seconds to reach its cruise speed. Trifan 600 can also boast a 5-passenger capacity and business class comfort and luxurious accomodations. 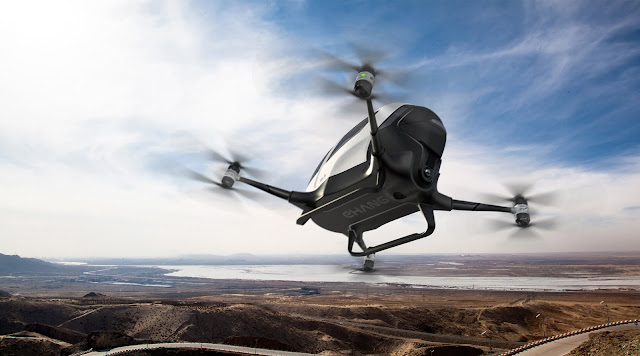 Ehang 184 makes getting from point A to point B hassle free: no need to check for road situation or spend your time behind the steering wheel. This autonomous aerial vehicle lets you travel at speeds up to 60 miles per hour, while enjoying spectacular views from the altitude of 1640 feet. The built in battery pack can last for trips up to 25 minutes but can be fully restocked to a 100% charge in one hour.

Vimana is designing a means of transportation that will combine that capabilities of an airplane, helicopter and autonomous drone in one single product. Indented to be used in smart cities of the future as air taxis, Vimana is powered by decentralized guidance and artificial intelligence systems. These systems ensure your safe trip is both fast and safe.

By using hybrid propulsion system Equator Aircraft has several advantages over its competitors: this airplane has a longer flying range, better efficiency, lower weight and more room in the cabin. Thanks to the well designed control management system, the pilots can enjoy a reduced workload and experience higher levels of security every seconds of the fight. 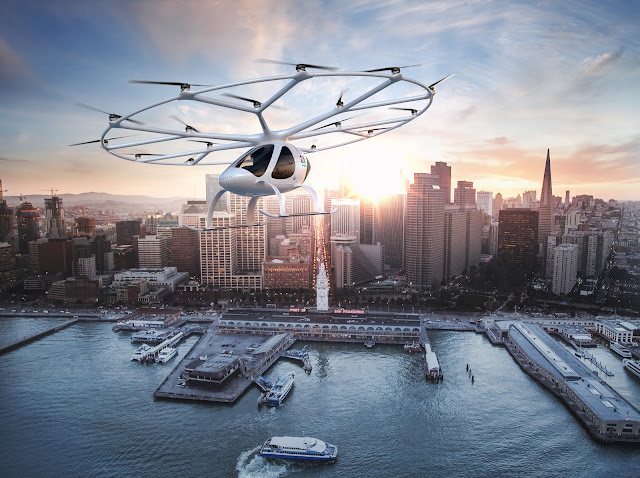 Volocopter is a manned VTOL that can take off vertically like a regular helicopter but works on electric power like a regular drone. As a result, this aircraft can be suitable for city use, thus increasing our mobility and solving various personal transportation problems. Volocopter uses 18 motors and 9 batteries to fly at speeds close to 60 miles per hour. It can be controlled by an autopilot or a joystick.

Dufour Aerospace make their first step towards electrified air travel with their product Aero 1. It is an electric twister airplane that can handle 60 minutes of regular flying or up to 30 minutes of rugged aerobatic flight even in freezing weather conditions. The electric motor and propeller in this aircraft make low noise, so the company plans to use them in their more ambitious aviation projects.

Alpha Electro is an advanced ultra-light aircraft that uses electric propulsion system. The short take-off distance, powerful climb, and flight reserve of one hour make it suitable for flight training and short commercial flights. The aircraft's powertrain is operated with one simple lever, so the students can focus on learning the craft with little to no distractions.
electric aircraft electric vehicle top 10 rating 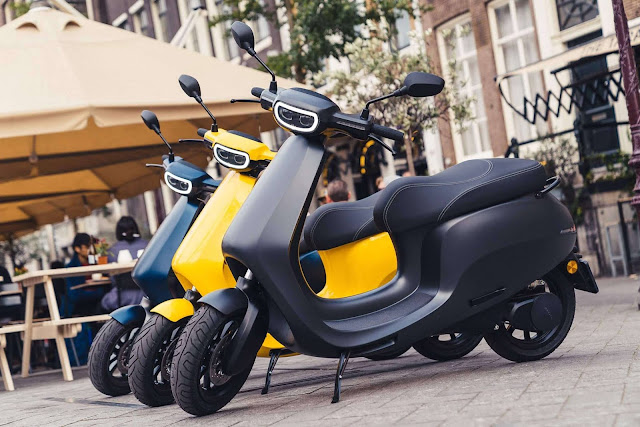 Electric scooters seem to be talking over the cities, big and small. With their efficient electric motors and removable battery packs for convenient charging, electric scooters make perfect sense for short distance commuting: no matter if you are going to work, picking up groceries or just navigating the city. Today we suggest checking out some of the most exciting electric scooters that are just ready to hit the market.
10 Newest Electric Scooters to Bring More Power and Commuting Range in 2020 eQooder  Quadro Vehicle company have announced their partnership with Zero Motorcycles that resulted in the creation of an electrified version of their four-wheel scooter. Not only will the electric model produce no emissions, it will also provide a hefty performance boost. With an electric motor rated at 45Kilowatt of peak power and 80 pound-feet of torque, this vehicle will show performance similar to that of a 650cc maxi scooter. The riding autonomy will be around 90 miles and the full charg… 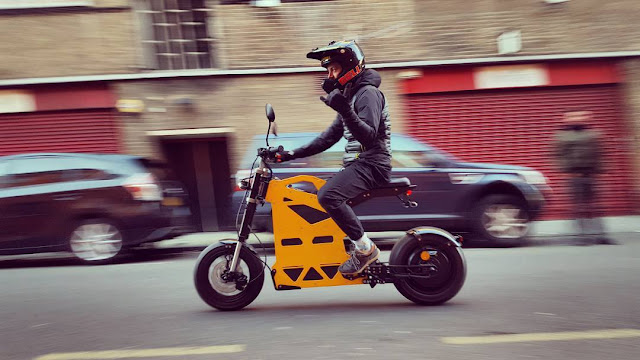 Raker is a zero emission alternative to your average moped or lightweight motorbike. Its unusual styling will definitely attract the curious passers-by, while you get a light bike with a 2000 Watt motor that goes up to 70 miles on one charge. With Raker you can easily become a part of the electronic mobility movement and travel from A to B in style.
Although Raker is quite a looker and would attract a lot of interest from the passers-by, it comes at a price. The pricing of these vehicle may play a vital role in the number of sales, especially if we compare it to other affordable models in this segment: 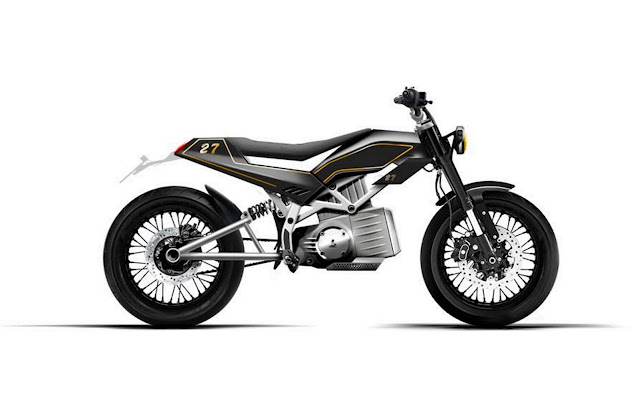 Gloria is a brave electric motorcycle concept that is expected to attract the interest of the younger generation towards bikes. The creators are working on the technology that will enable their bikes to be highly customizable. Different looks and styles are supposed to appeal to a wider audience and attract more sales. A prototype of Gloria has already been created, while the production model is believed to be finished in the upcoming years.